His colorful series of printed posters (not in stock right now) as well as his series of monitors are a reflection on today’s mass media.

In monitor series Ib Jorn refers to the way modern man spends much of his time in front of electronic screens. The images we view stay either imprinted on our retina, or diffuse into a vague impression of colour.

The artist has liberated himself from our obsession with monitors and television screens. He spends his time collecting physical fragments and studying colours to incorporate in his images. This freedom from the monitor culture expresses itself in an explosion of colours.

His work is inspired by the statement:

“Do You Know How To Use This Weapon?”

Ib Jorn uses his art as a weapon. Usually a weapon is used to repel the enemy. What enemy Ib Jorn is chasing is unclear but seems likely that it is a personal demon!

Currently we are showing a series of drawings created between waking and breakfast, when the terrors from the night need to be banished from mind. 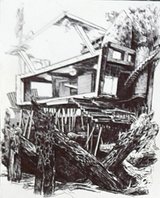